I never really understood the difference between faith and belief until recently. I had always assumed faith was just the biblical way of saying belief, but I have come to realize that it is much more than that. You see, in my opinion, belief can simply be quantified as a Yes/No variable i.e, you either believe or you don’t.
However, faith adds another layer to believing. It’s all about how committed you are to what you believe. It is a continuous variable of which quantity matters, the question with faith is not if you have faith or not, it’s how much of it do you have? Faith is always active while belief can be passive. You can believe in something and stay on the sidelines, but with faith, you can’t help but be involved, it takes effort on one’s part to get a larger quantity of it. 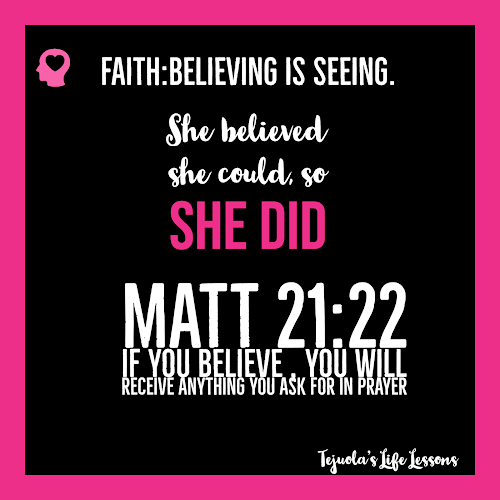 “Talk is cheap” they say, I say belief is cheap. This point was well captured in the book of James 2:19, when it says that even the Devil believes that there is one God. To put it differently, belief is to simply agree with a fact based on evidence whether it’s real or fabricated (like the case of what President Donald Trump believes ..but that’s a different story and another post ... 😂 ).
Faith on the other hand does not rely on evidence, it’s a conviction in your spirit based on your relationship or connection with God. The more you seek him, the more you find. My prayer is that as we continue to seek after God’s righteousness, may we be filled and our faith level increases in Jesus name.(Amen)
Always 💕 💕 on my mind,
Tejuola

I stumbled upon a well researched article on how churches are failing to support families with children affected by Autism. This wasn’t surprising at all to me as I have had several encounters where I was asked to leave the congregation because my son was too loud. In fairness to other members, they have a right to a quiet enjoyment of church service. But what ends up happening to mothers like me is that we stop going to church altogether, souls that are meant for christ become lost. That was my case for a while. When churches don’t acknowledge “Autism” and all other forms of developmental disabilities or are misinformed, they fail to accommodate. While we all need prayers and healing, the accessibility of church is of immediate importance to families with special needs, “Faith without works is dead”(James 2:15-17). Providing additional supports for example through a special needs department, signages welcoming people with disabilities in the congregation and above all, encouragement b
Post a Comment
Read more