All things work together for my good.

Before my son was born I had envisioned what he would be like, dark like his father and friendly like his mom, those were the two qualities that I can remember holding on strongly that he would have. You can imagine my surprise at the hospital when he came out almost as fair as a white boy and as he got older, he didn't become the social butterfly that I had hoped he would be🤣🤣🤣. On the contrary, to my intense dislike he was labelled very early in life by some friends as 'anti-social' and was nicknamed 'foreign' because of his unique character. And he is allergic to peanut butter, African boys aren't supposed to have any allergy at all according to them..SMH😠😠 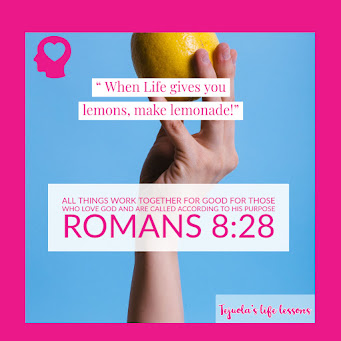 Another surprise I got with my son is the ability to put one out there, I have always done a good job in life with just fitting in with my environment and not attracting any attention whatsoever to myself. I'm often referred to as the quiet and gentle one (at least out of my three sisters ), I avoid conflict like a plague even when it can lead to resolution and growth🙈. I would rather just ignore wrong doings than to voice out my feelings (I am now committed to learning though, unpleasantness now is better than developing resentment later).
It used to bother me when people aren't proper and especially when things are not in their proper place, I would fix things because it made me feel better. You can now imagine how disturbed I was the first time we went for a hospital visit or to visit friends and families and my son would cry the whole time or the many times he sat in the middle of a store or church and refuses to be picked up or to be soothed by anyone. By typing this, it brings back so many memories of days we would have to leave places because of behaviour issues. He has since grown out of a lot of these behaviours after receiving Intensive Behaviour Intervention and primarily because God's grace abound in his life to make these interventions work.
One thing that I have learned in this journey as a super Always Unique Totally Intelligent Sometimes Mysterious mom, is that 'when life gives you lemons, you are supposed make lemonade out of it! If only I could have seen the boy my son would become today, I would have been less stressed then. As a child of God, I now choose to always remember that all things work together for the good of those who love God and are called according to his promise Romans 8:38 and that is my hope for you too.
Always 💞💞 on my mind,
Tejuola

I stumbled upon a well researched article on how churches are failing to support families with children affected by Autism. This wasn’t surprising at all to me as I have had several encounters where I was asked to leave the congregation because my son was too loud. In fairness to other members, they have a right to a quiet enjoyment of church service. But what ends up happening to mothers like me is that we stop going to church altogether, souls that are meant for christ become lost. That was my case for a while. When churches don’t acknowledge “Autism” and all other forms of developmental disabilities or are misinformed, they fail to accommodate. While we all need prayers and healing, the accessibility of church is of immediate importance to families with special needs, “Faith without works is dead”(James 2:15-17). Providing additional supports for example through a special needs department, signages welcoming people with disabilities in the congregation and above all, encouragement b
Post a Comment
Read more